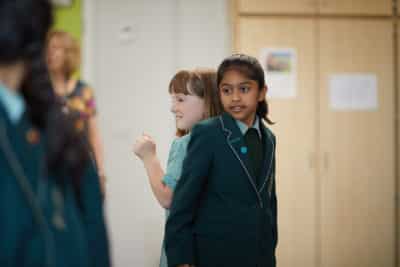 We have a long standing and mutually-beneficial relationship with the Merchant Taylors’ Company. Providing support for education is a key part of the Company’s philanthropic work. This is predominantly achieved through their work their associated schools, including St Helen’s.

We are appreciative of Merchant Taylors’ support for our Bursary Programme, and for including St Helen’s pupils in projects such as the Remembrance & Hope Concert, which took place in Birmingham to mark the centenary of the signing of the Armistice which marked the end of the Great War.

Our joint activities with Merchant Taylors’ School and St John’s are well-established and continue to develop and improve.

We have engaged fully with the Combined Cadet Force (CCF) at Merchant Taylors’ School. We were delighted when the first cadet to receive the partnership sword, which celebrated 25 years of St Helen’s involvement with CCF, was awarded to a St Helen’s student in 2017.

Our partnership with Merchant Taylors’ School in Phab Club has also grown. Our staff and students were key in the establishment of Phab Club on Friday evenings, which is run by girls and boys in Upper School and hosted at St Helen’s. Phab week is now in its fifth decade.